I see beautiful young people joyfully coming to hear an old man speak. Children of ours, what makes you trust the experience and knowledge of an old man, and what makes you seek his advice?

I know that you are interested to know how we, the older ones, have coped with the temptations and trials of a lifetime, trials of hardship and also trials of pleasure. But you do know that we didn’t make it through all our trials and temptations in the right way. We’ve had ample and serious failures and many have gone to their grave with that bitter aftertaste in their mouth and heart: bitterness for their stupid dreams and their final collapse which no remorse or repentance had restrained. My children I am able by experience to assure you, however, that both today and in times past a tear did trickle down the cheek of many a man and woman as they drew their last breath on this earth.

I know that a strong feeling prevails in your hearts subconsciously and more consciously in your thoughts: the sense of a great failure of cilivisation, a betrayal, a trap that has been set on your life’s path. Still, your faces and your bodies are beautiful, and the natural world around you is struggling to circumvent human intervention and smile at you kindly. Noble feelings surface in your souls and embrace you tenderly, albeit shipwrecked and fighting to stay afloat.

You are joining the world of adults and you can now sense how much you mean to us. You are our offspring, our blossoms and all that we felt as good and beautiful in our lives we owe to you. Almost all else that ever we perceived or thought of as being good in our lives was poor to vulgar by comparison.

Now with all the knowledge you have acquired and all the development and cultivation of your minds, you know how well we raised you, how rightfully we paid for our joy at your birth, our pride for your academic progress. But get ready to hear the rest too.

You are the few that survived the brutal extermination effected by an entire society governed by ideologies. (The speaker refers here to the abortions that have taken place on a mass scale). Now that you are gathered here you feel the warmth of togetherness, but when you return to your homes (many of you) will be surrounded by the chill of loneliness and you will miss your brothers and sisters. And then you will understand why depression has taken over our societies and why the blasè attitude is in fashion. Those who haven’t experienced this within your families, breathe in the climate I described above in your extended environment. The environment too is ours.

You are the children of [the age of] divorce. We have deprived you of the greatest happiness for children, the security they feel growing up with parents who are in love with each other. You are the children who are impeded by and offended against by your country’s education system [paideia1] which tries to degrade you; when your grandparents went to school secretly in the night of Turkish Rule they sang silently, inaudibly:
“Oh my bright moon, light my steps that I may walk to school,
To learn my letters,
Letters and studies,
The things of God”

One of my grandchildren asked me once, “Grandfather, what are the things of God?” What could I answer her?
And we send you to school, to be taught that one plus one makes two, even when that ‘two’ refers to your parents, who in your hearts are as one. And grandmother is a third person according to rationalism and she is packed off to a home for the elderly, to drown in loneliness. And rationalism says the baby in mommy’s tummy is number two and bids her do the subtraction. Two minus one equals one. And so by subtraction the woman is free again; “hóper édei deîxai”2! And when the mother “sees” her baby removed piece by piece, then the entire dream of happiness amidst the rich gifts of the bourgeois culture turns to dust.

This misadventure of our education is due to the Enlightenment, that is the movement that preached to the world freedom from prejudices, and the name given by the enlightenment for prejudices was Religion; what is most tragic for Europe’s history is that in fact the religion which the enlightenment encountered here was mostly prejudices, for example divine justice, Dante’s inferno, the Holy Inquisition, the state Church, the self-sufficiency of the morality of “values”, social classes and other such.

While in Orthodoxy justice is abolished and replaced by grace, and rational schemata are replaced by persons, the West sank into the prejudices of divine justice which drowned Christians in guilt and threw them into the labyrinths of logic and proof through observation and experiment. Corrupted by the “enlightenment”, even Ecclesiastical agents depicted the Theotokos as a bashful simple girl, and they discussed dogmas of faith as they would algebraic theorems.

This spiritual decline was named enlightenment and orthologism (rationalism) that is to say correct logos (ratio), as if the Christ Logos was not enough for them.
Entire generations received this rearing and education and advertised it as noble and lofty, thus captivating and drawing into it our own Adamantios Korais and other “modernist” teachers; they brought this European education to Greece and they taught Greek children the “godless letters” as Papoulakos called it. These godless letters were later named lights (that’s how Paris came to be called city of lights) and they adored their “lights” instead of God and man. Yet an illiterate Greek, Makrygiannis, surpassed all of Europe in wisdom by saying that “man makes the lights and not lights the man”. But we were dazzled by the achievements of European enlightenment, so we copied it and offered it to you as a precious gift. We ignored our own representative of Greek enlightenment, saint Kosmas Aitolos [Kosmas of Aetolia], who established hundreds of schools in Turkish-occupied Greece, believing that schools open the eyes of people to understand the Gospel.

The world wars of the 20th century as well as English imperialist policy before them struck a severe blow to our good impression of europeanism when we realized -through much pain and blood - that the much celebrated, legendary education of the European civilisation, with the German civilisation as its leader, produced such fierce and numerous demonic monsters, as were the young graduates of renown European schools wherever they set foot as conquerors. There was also the barbarism and the degradation of the west - the graduates of the great universities of America - in Vietnam, and that was another lesson we received concerning the European education of enlightenment; yet it is to this education that we send you time and time again because we remain bourgeoisie and we lack the leventiá [=goodness- honesty-courage] to repent.

This is the world we leave to you: shameless, prosaic and unmindful, aggressive and terrified, a world without true philosophy, which –together with European philosopher Sartre – professes that: “The other is my hell”, whereas in our Orthodox upbringing we say “The other is my God”. How will you manage, our children, to jump over the river which runs raging and murky between the darkness of enlightenment and the Gospel of Christ who is God himself, crucified out of love?

We, your parents, in order to ease our conscience, have created the myth that a child nowadays costs a lot in food, clothes, studies, recreation etc. We brought you up to be demanding and at the same time to have pressing needs, always unsatisfied and tiresome to those around you. In other words we made you unhappy and disagreeable in society. This is the world that we, your parents, pass on to you as we depart from this life. This is the tragic irony, as they say with respect to ancient drama: making you miserable by the very means through which we seek to bring you happiness.

Furthermore, we hand over to you a world armed with nuclear heads, missiles, aircraft carriers and poisonous gases, cyanide injections for euthanasia, and stun grenades for protest demonstrations. In other words wickedness assured and fully equipped. Of course we tell you that all these are for your defense, but the more powerful countries do not hesitate to use them offensively. In our own way we remind you of a saying from Golden-age Athenians, namely, that the law imposed through the right of might was neither first discovered nor first used by them, but it had existed since the world began. And another maxim of the Athenians: “Οὗ ἂν κρατῇ τις ἄρχει”, meaning whoever has the power makes the rules. And by power they mean “lawful” violence.

So we teach you that for you to sleep peacefully in your beds, some others must necessarily lie sleepless, in mortal fear of your superior power of arms. That is why your dreams are troubled and during sleepless nights you seek refuge in dimly lit bars.

You are young, you have strength, power – gifts of God – to build a stairway that will take you to heaven, to the home of your soul, as generations of Church Fathers have taught us. The way is open, the Theodokos is the ladder; the ladder that Jacob saw and understood that that place was holy. So shake off the foolish philosophies that we bequeathed to you – enlightenments, scepticisms, empiricisms, platonisms and so much more that is futile and vain – and seek the face of God. Then the aroma of innocence will fill the world and He who “will wipe away the tears from every face” will dwell in your hearts and in your relationships.
This will be your revolution but also your happiness.
Amen. 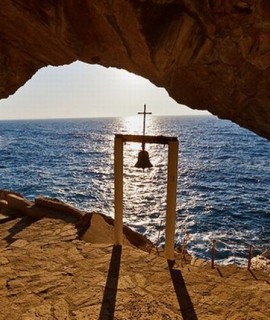 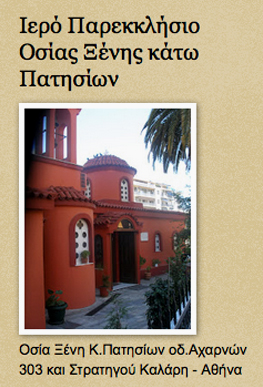